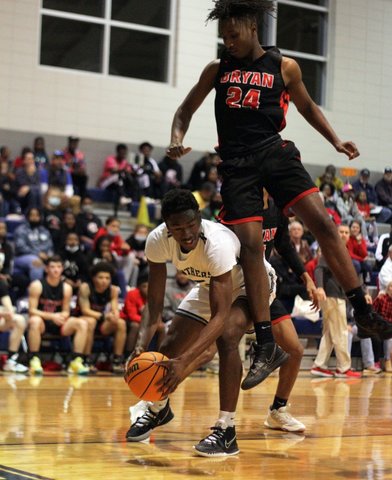 As area high school basketball teams wrap up the regular season and prepare for regional tournaments, some teams are closer to securing the top spot while others are slipping.

On Tuesday in Portal, the Panthers host Bryan County in a battle for the region’s top spot. Bryan County knocked out Portal earlier in the season 59-57 when the Panthers were still an incomplete team due to suspensions. On Tuesday, Portal was full and at home, but once again Bryan County had their number as they cruised to a 73-70 victory, closing the regular season with first place.

The game was back and forth throughout and in the fourth quarter, Portal held a three-point lead until late in the fourth when Bryan County warmed up. With just under a minute to play, Devontae Bowers kicked in a layup to give Bryan County a 68-67 lead. The Panthers turned the ball over on their next possession and Jamal Campbell scored and was fouled with 20 seconds left.

Campbell’s free throw gave Bryan County a 71-67 lead. Joe Thomas quickly hit a three-pointer to cut the lead to 71-70 with 10 seconds left. Bowers would be fouled and made both free throws to extend the lead to 73-70. Portal had a chance to send the game to overtime, but Thomas took a 25-foot jumper with four seconds left and Bryan County secured the rebound as time expired, bringing the Panthers down 12-6 on aggregate and 9-3 in regional play.

“You have to hand it to Bryan County because I feel like they beat us and came away with a three-point win,” coach Jeff Brannen said. “They got every ball 50-50 and just outplayed us tonight. I hope you will learn from this and that it will not happen again.

Bryan County fell behind early 8-0 but stormed back finding plenty of success in the paint. The Panthers were carried by guard Elijah Coleman who had 19 of his game-high 29 points in the first half. Amir Jackson had 14 of his 18 points in the second half, but the story of the game was that Portal allowed Bryan County to hit uncontested layups and open up three pointers.

Coleman’s 29 and Jackson’s 18 paced the Panthers while Bryan County was led by Bowers with 24 points and Elijah Mincey with 17. Next, Portal travels to Claxton on Friday night.

The Portal Girls fell to Bryan County 65-23 on Tuesday. The Panthers drop to 3-14 overall and 2-10 in regional play. Shaneisha Coleman led the Portal with eight points.

The Bulloch Academy Lady Gators continue to tear their region apart. The final casualty was Frederica as Bulloch Academy won 86-20, dropping to 20-2 overall and 7-0 in regional play.

“I felt like we did what we had to do and played really well in spurts,” coach Chandler Dennard said. “We played pretty solid but bet a bit too much on defense. I didn’t feel like we shot the ball particularly well, which is hard to tell when you score 86, but there are still things we need to work on before the playoffs.

The Gators opened a reasonably tight game with a 20-2 run that started late in the first quarter and saw them take a 43-11 lead at halftime. Dennard pulled his starter late in the third quarter but his subs still managed to beat Frederica 15-7.

“Our second group got valuable playing time this year,” Dennard said. “You can tell they’ve really improved because in the last few games they ended up winning the fourth quarter.”

The Gator boys lost to Frederica 82-41 as they drop to 0-17 overall and 0-7 in regional play. Brennan Perosa led the Gators with 12 points.

The Statesboro Blue Devils swept Glynn Academy on the road Tuesday night in Brunswick with the girls winning 61-52 and the boys taking a 65-55 decision. The Lady Devils improve to 20-3 overall and 9-2 in regional play and were led by Terrika Gibson with 17 points. The boys are now 20-3 and 9-2 as well and were led by Albert Mikell with 20 points. Statesboro ends the regular season Tuesday at home against Brunswick.

Bulloch’s Southeastern Yellow Jackets managed to eliminate Liberty County on Tuesday night 50-43 behind 15 points from Khristian Clark and 12 from Kayden Taylor. The Jackets then lost a 69-49 decision Wednesday night at Windsor Forest. Clark again led the Jackets with 20 points as Southeast Bulloch drops to 9-11 overall and 2-7 in regional play. Southeast Bulloch will be at Savannah High Friday night.