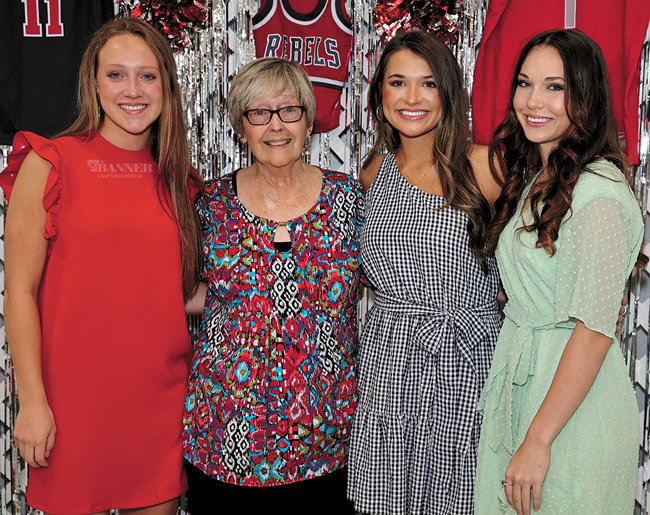 Basketball teams celebrated at the banquet

McKENZIE (May 1) – The 2021-22 McKenzie Lady Rebels and Rebels basketball teams have been invited to a banquet and honored for their unprecedented success. Never in McKenzie athlete history have two teams earned in-state berths in the same year. Including the 2021 McKenzie Rebel football team and golf teams, it was the third and fourth team to earn state berths in the same school year.

The McKenzie Lady Rebels are the premier women’s state championships.

“We were the last team to play,” Lady Rebels coach John Wilkins said. The Lady Rebels 31-2 had a deep bench, mostly because the ladies bought into the program, made thousands of practice shots and leaned on each other, sharing the ball and the credit.

Wilkins is in his tenth year coaching at McKenzie. He now coaches both men and women.

The team’s assistant coach was Ashley Barker Lowe, who Wilkins says is “part of the (Wilkins) family.” She was a player on the MHS women’s team and babysat the Wilkins while in high school. She was very involved in coaching and leading many efforts.

The winners were: Katie Chesser — Most Charged, Sixth Man; Mikaela Reynolds – Deviation Leader; Miss Rebel – Savannah Davis; Gotta Have Heart – Dani Dyer (the only senior), who was credited for leading the team. Davis was honored with a basketball commemorating her 1,000-point career. The 1,000 points were earned in the semifinal state game against Gleason.

In his farewell speech, Dyer praised the coaches for setting a high standard and for emphasizing Christ. She thanked them for taking time away from their families.

McKenzie’s Rebels
A football season that stretched into the first week of December prevented multi-sport athletes from training or playing basketball until the end of the football season. Wilkins said a season isn’t about where you start, it’s about where you end. The slow start was reversed as the team won the district, region and finished in the top eight of the state tournament.

McKenzie Lady Rebels and Rebels staged two unprecedented games in McKenzie Gymnasium within days of each other. Both resulted in section wins and trips to the state tournament.

All regions were Zayden McCaslin and Bryson Steele, with Marquez Taylor earning the Regional MVP title.

Jessica Moore was honored to receive the Taylor Buckley Award. Buckley died in a car accident while in high school.

The Andy Camp Award went to Zayden McCaslin and Savannah Davis. Andy Camp died in a car accident while returning to Murray State University. He was an MHS graduate in 1981, scholar and “fit in” with anyone, said his brother, Brad. The award honors the school’s citizenship, attitude, and academics. Camp’s parents, John and Karen, were present. Both are retired McKenzie educators. She was an MHS Rebelettes player and was an all-state basketball player.

The Barbara Boyd Memorial Scholarship was presented by Tim McBride on behalf of the Boyd family. She passed away two years ago and was one of McKenzie basketball’s biggest supporters. Recipients must demonstrate academics, character and leadership. Boyd was a former teacher at MHS and played for the MHS Rebelettes. The two recipients of the $500 scholarship were Dani Dyer and Zayden McCaslin.

She read proclamations honoring the Lady Rebels and Savannah Davis for being named Miss Basketball, TSSAA Class 1A.