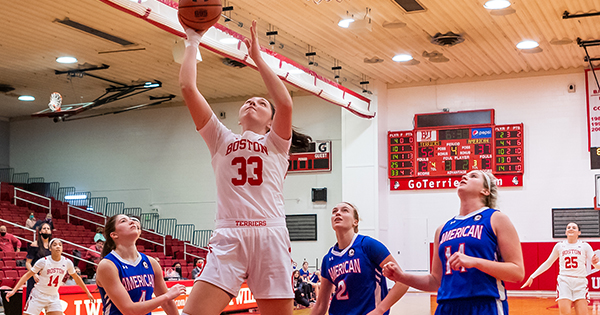 With expectations high for Boston University’s men’s and women’s basketball teams heading into their 2022-23 seasons, the stands de Case Gym should be running from Monday, November 7th. Both Terrier teams will return to the hardwood to open their respective seasons in a doubleheader against Crosstown rival but non-conference foe Northeastern University.

The BU women are chosen to win the Patriot League, the men are expected to finish second to defending champion Colgate.

“I’m very honored to have the league recognize me, but I care more about winning games than awards,” Durant said. “We think we’re going to have a pretty dominant presence this year. The ultimate goal is to win the league.

Graves has a similar view of the 2022-23 campaign. For her, the pre-season ranking is a motivation to push her team further. “Obviously the pre-season polls are nice, but there’s still a lot of work to do,” the coach said. “We’re confident, but we don’t think that means we’re just guaranteed a championship. We have to refine ourselves and work even harder because people are going to chase us even harder.

For BU women’s basketball, the devil is in the details. During the final weeks of pre-season, the team focused in training on isolating areas where they had previously failed.

“We only reached the quarter-finals last year, but it felt like we had the parts,” Durant said, along with Johnson one of the team’s four captains. “All the little things added up in this loss at American. Everyone on the team really wants to make sure we’re good at every aspect of our approach in order to be successful.

Last spring, in Graves’ first season at BU, the Terriers finished third in the Patriot League, with a 12-6 conference record, but fell to American University 70-48 in the semifinals. of the conference tournament.

“You obviously learn in your freshman year the little things of in-game adjustments,” Graves says. “The big thing this year for me is that we have a 12-man roster and how to handle lighter loads in training while trying to improve.”

The team’s two freshmen — Anastasiia Semenova (CAS’26) and Sam Crispe (CAS’26) — are a great fit for the team, Durant says. And Graves says she thinks they’ll contribute a decent amount this season.

With four captains on this year’s team, the Terriers will look to their leaders to start the season Monday against Northeastern, a team they fell 53-45 last December.

“We’re looking to start throwing a punch right away,” Durant said. “Having our first game against a Crosstown rival is always fun, especially because it’s a doubleheader with the guys. People should attend both games because it will be a great night of basketball.

“I feel like we’re all on the same page,” Graves says. “We have a really achievable goal ahead of us, but we have to earn it, it’s the team’s top priority and nothing else.”

For the players and head coach Joe Jones, the team is focused on winning their own hardware.

“I really like the team we have, I think they have a lot of potential,” Jones said. “I think there’s a group of guys who really want to win. We always aim to be regular season champions and Patriot League tournament champions.

The Terriers enter the season second in Patriot League preseason voting, behind Colgate, which has won three of the last four Patriot League tournaments. The Terriers were the spoilers of the 2019-20 season, winning everything before the COVID-19 pandemic upended their dream of playing in the NCAA Tournament.

For Harper, who was on that 2020 championship roster, getting back to the top of the Patriot League is a priority.

“We’re doing everything we can to be able to win a championship,” Harper said. “That’s the overall objective of our team this year: to put everything aside and unite to win a championship. This feeling was not like the others, so we want to be in the same position as we were three years ago. Even though we didn’t have the opportunity to experience the NCAA tournament, we had a little taste of it, and I think we are more than ever hungry to be there again.

Last season, with an 11-7 conference record, BU finished third in the Patriot League standings. But an 85-80 overtime thriller against Navy in the conference tournament semifinal sent the Terriers home.

Among that Patriot League Tournament team were Patriot League Player of the Year Sukhmail Mathon (CAS’21, Wheelock’22) and fellow All-Patriot League First Team guard Javante McCoy (Questrom’21, SHA ’22). Both graduated in 2022, but Jones is confident Mathon and McCoy’s combined 32.5 points and 14.1 rebounds can be replicated.

“I don’t think you know how you’re going to do with just one guy,” Jones says. “You have guys who have really improved, like Malcolm Chimezie (CAS’25), and freshmen, like Otto Landrum (CAS’26) and Nic Nobili (CAS’26). So we feel like to have good quality depth up front, and that’s where Mathon came in. I think this year’s squad will be more balanced than last year’s.

With the inclusion of Landrum, Nobili and Ben Roy (Questrom ’26), Harper expects team culture to lead the Terriers to success.

“We’re going to be a really connected team,” he said. “It is going to help us with what we are focused on: our next man mentality. We’re all on the same page, and we’re all focused on the good stuff and listening to what our coaches are saying. We have an excellent state of mind and everything is possible for us this year.

The Terrier men’s and women’s basketball teams play their home opener against Northeastern University at Case Gym tonight, Monday, November 7. Women play at 4:30 p.m. and men at 7:30 p.m. Tickets in the dual program are free for students with a sports pass, $5 for students without a sports pass, $7 for faculty and staff, and $12 for the general public. All home games and conference contests can be streamed on ESPN+, and fans can follow BU on GoTerriers.com and @TerrierMBB on Twitter.

FacebookTwitterLinkedinMix
2022-11-07
Previous Post: A year of transition in perspective for UNBC basketball teams
Next Post: The skinny of all MWC basketball teams during the 22-23 season – The Nevada Sagebrush