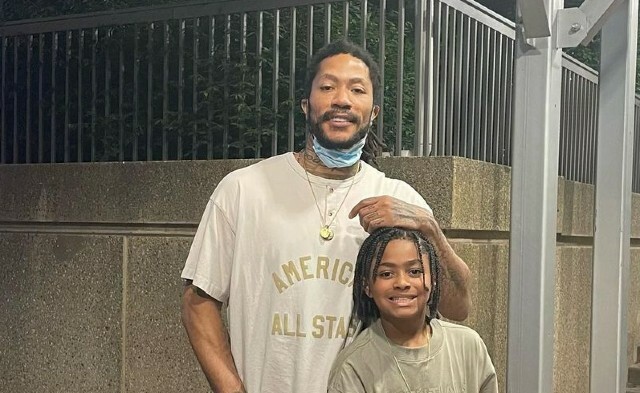 Derrick Rose’s son, PJ Rose, is a viral sensation. The youngster was recently recorded as he showed off his skills on the basketball court. Many are already comparing PJ to his father.

The 9-year-old and his team competed in the Matteson Youth Basketball League near Chicago. PJ’s team won 2-0 against other third and fourth graders who also played hard to win. “Look at D-Rose’s son,” said one YouTube fan. “I love how much he loves his teammates,” said another social media follower.

Some have commented on PJ Rose’s height compared to the other kids on the court. “He looks huge compared to most of them,” said one YouTuber. “This is crazy,” said the fan. Another social media user wrote, “He will (sic) show us what Drose could have been without the injuries.”

Derrick Rose arrived on the NBA scene in 2008. The star athlete was expected to be a major force in the sport, but suffered several injuries that ultimately led to setbacks.

“You have to know who you are,” Derrick said in a recent interview. “All that free time or even getting injured, that was my way of tapping into it,” the NBA player share. “Many people do not have the chance to draw [and recover], and they get caught up in (sic) propaganda. Winning MVP so young, doing this and doing that, I got caught up in it,” Rose admitted.

“Everyone has their own issues,” Derrick continued. “Everyone does things at their own pace,” explained the star athlete. “I just had to figure out who I am and what I stand for. I prioritized things.