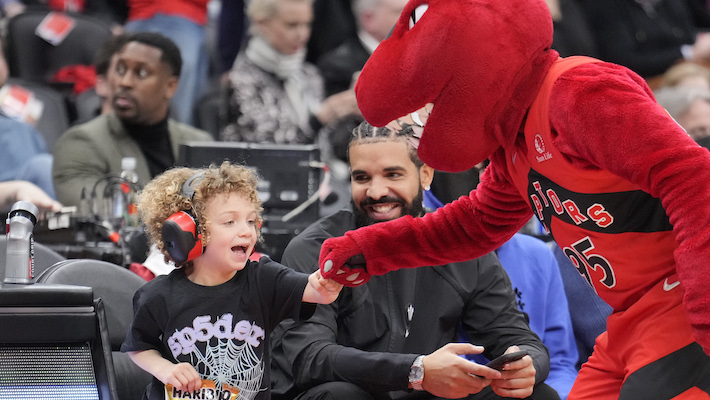 There may not be a rapper who loves basketball (or at least is open and enthusiastic about his love of the game) as much as Drake. (Literal pro basketball player J. Cole may be an exception.) Drake is a staple at NBA games, and he’s been an official “global ambassador” for the Toronto Raptors since 2013. Naturally, Drake began passing that passion on to his son Adonis. , who was recently seen adorably mimicking LeBron James’ mannerisms while filming on the Drake lot.

Speaking of cute Adonis videos, Drake recently offered another one on his Instagram Story. In a selfie-style video, Drake asks his son, “Yo, where did you learn to shoot like that?” Adonis shrugs and replies playfully, “I don’t know. Drake then noted that he had just made four out of five shots and added, “You’re in cash right now.” Drake asked again how Adonis became such a sharpshooter and the boy replied with an even bigger shrug, “I shoot at school!”

In other recent Drake-Instagram-post, he shared a photo of himself with the Haim sisters yesterday, writing, “I just met the Beatles.” The band reposted and added, “We are the Beatles.” That of the trio The One More Haim Tour brought them to Toronto last week, which is why the four were able to meet and take a picture.

Watch the video above.