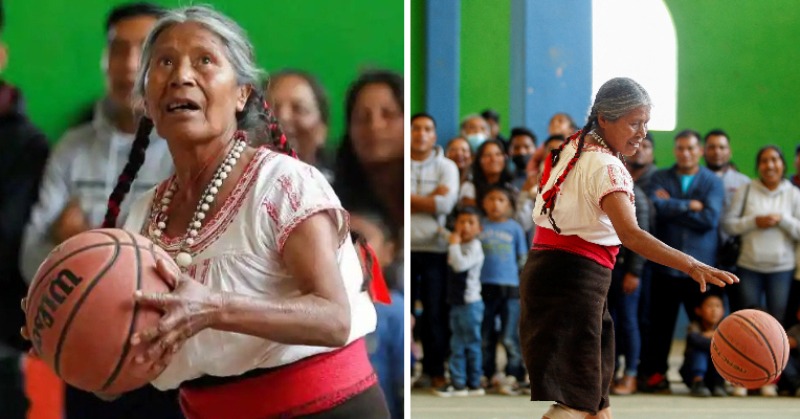 Judging by her incredible skills, no one can guess that Andrea Garcia Lopez is actually 71 years old. The Mexican has become a social media star after a video of her showing off her supreme basketball skills went viral.

Andrea earned the nickname “Granny Jordan” after a video went viral showing her lighting up the courthouse in her small, isolated town of San Esteban Atatlahuca in the southern state of Oaxaca.

The video has been viewed more than a million times since it was uploaded by her grandson.

In the video, Andrea, a local craftswoman, fakes an opponent close to the basket to make room for a shot she expertly scores from the backboard.

Even though her knee is starting to hurt a little, she aspires to continue playing for many years.

Earlier, a video of a 64-year-old Kerala man juggling a soccer ball like an absolute pro went viral.

In the video, James was seen showing great control as he juggles a soccer ball over his shoulders and head. The video was shared by Pradeep Ramesh on his Instagram account, @prsoccerart.

“I had the privilege of meeting this 64-year-old man who still plays football. He drives a a truck makes a living and carries his football kit with him in his truck. He was part of the Wayanad football team and is the only one who still plays the game. One thing I really learned from him is this- Do you like doing something? Go ahead do it,” Pradeep captioned the short clip.

The video begins with the YouTuber showing off some neat skills and passing the ball to James. And then the magic happens. James takes the ball in his stride and soon shows off some silky freestyle moves. The 64-year-old kicks the ball and even balances it on his head.

FacebookTwitterLinkedinMix
2022-08-06
Previous Post: IWU basketball teams ready to fly to Europe
Next Post: ‘Granny Jordan’, 71, is earning internet thanks to her basketball skills in Mexico. Watch the video