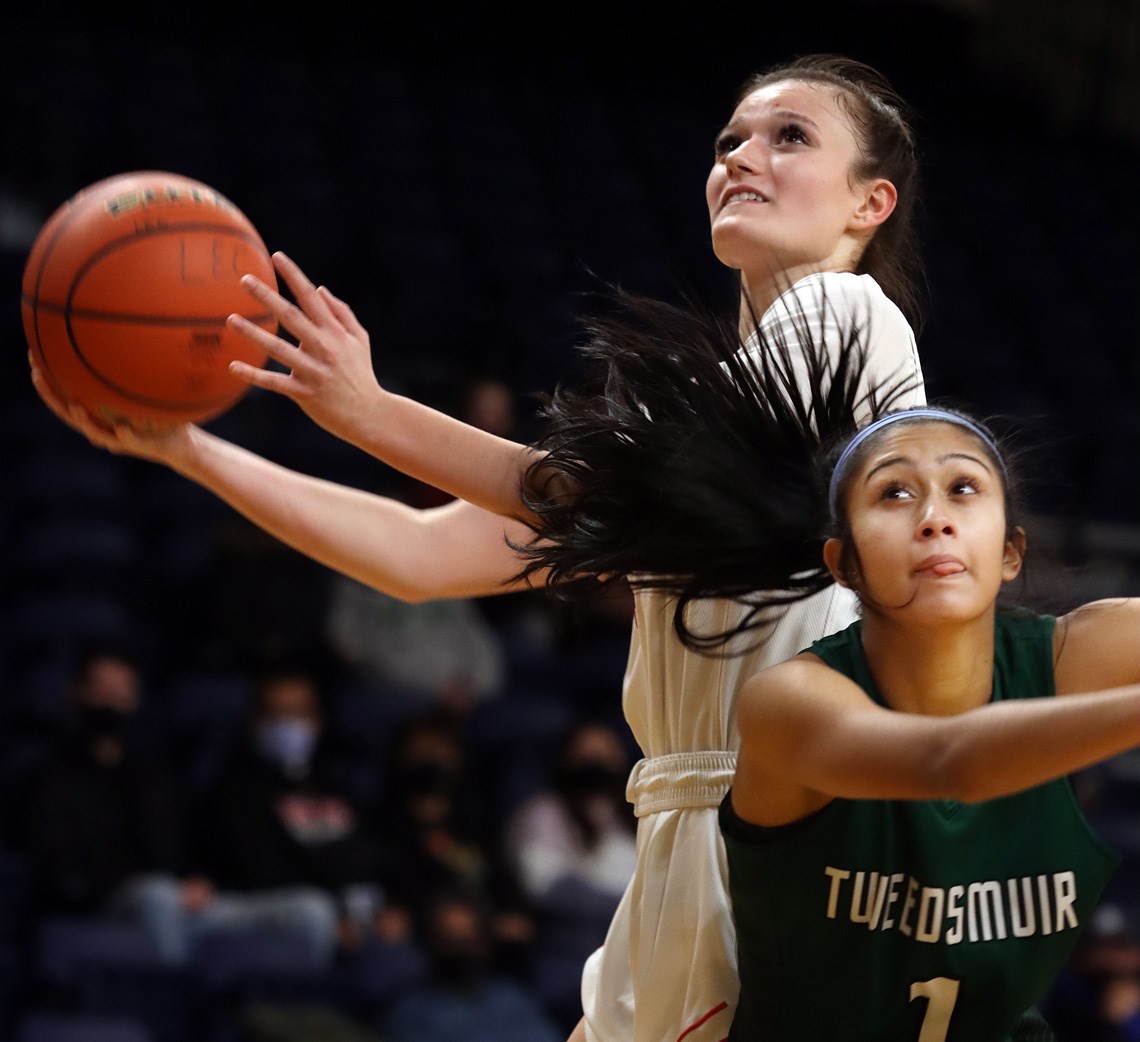 It has been nearly two years since the women’s high school basketball teams have played competitive games. The juniors then became seniors and they are hungry to end their high school careers on a winning note.

Terry Fox’s Ravens have carried a chip on their shoulders for nearly two years.

The once-upstart team, made up mostly of 10th-grade players, lost the 2020 Senior Provincial Championship game to the Semiahmoo Totems by 52 points.

It was their last competitive game.

Less than two weeks later, the world went dark due to the COVID-19 pandemic.

It’s a long time to bear the burden of such a great loss.

“Missing all of last season galvanized our group with a singular goal: to win the provincial championship,” he said.

To that end, Carkner said his players spend a lot of time in the gym, individually working on skills like shooting three-pointers.

“We are confident that all team members can now shoot all three.”

But his stalwart Riverside Rapids players who have persevered through uncertainty are chomping at the bit to regain their competitive edge ahead of the championship game in January.

Craig Percevault, coach of the Dr. Charles Best Blue Devils, said last year’s losing season was largely a case of losing sight. Several players have lost their connection to the game and their teammates, presenting challenges to reinvigorate the program this season.

“It’s been difficult to get our athletes to buy in and commit to improving,” Percevault said, adding that some players he hoped to play again have left the sport altogether.

Ross Tomlinson of Heritage Woods said some girls direct the energy they would have invested in basketball into other pursuits like schoolwork and part-time jobs, or outdoor sports like soccer, softball and tennis which could still be played safely when indoor activities were largely closed.

Sue Sands said that although the sport has been a bit of a tough sell at Port Moody Secondary in recent years, she has encouraged some of her charges to take the initiative to find places to play in the community and work on their game when they were expelled from the school gymnasium.

Centennial Centaurs coach Stephen Bruyneel said he made sure to keep his girls engaged in COVID-compliant workouts throughout the shutdown until the start of this school year.

“It helped a bit,” he said. “But the lack of real games hurt. We really have to keep working to get in shape. »

Riverside’s Langford said he felt especially bad for last year’s seniors who were robbed of their opportunity to put a final stamp on their high school career.

“They’ll never get that back,” he said.

Bruyneel said he had tried to maintain some sense of continuity in the Centenary program by hosting a special senior night for players who graduated last year, while Tomlinson kept players connected with virtual meetings twice a week as well as online training.

Best’s Percevault said he received a good response to a special basketball skills class he convened during the shutdown that he hopes translates into the realm of competition this season.

Here’s how the teams measure up:

With only one senior, Mollee Jones, the Centaurs are young. But with the core of the team made up of Grade 11 players who finished ninth in the provincial junior championship when they were in Grade 9, Bruyneel is optimistic about Centennial’s potential.

“Our strengths are height – we have two positions that are 6’3″ – and some players who can drive and shoot at three,” he said, adding that the team would rely on basketball- old-school ball for executing pick-and-rolls, and working the offensive zone upside down through the posts.

Besides Jones, the Centaurs will look to 11th-grade guards Jessica Ng and Alex Austin, as well as outposts Blessing Ibekwe, Aylee Maconachie and Amelia Perry to carry the load.

The Devils enter the season with only one senior on their roster. That means juniors Eloise Herdman, Nisha Parhar and Josefina Rodriguez will have to lead young players like 10th-year point guard and winger Denise Mendoza and 9th-year forward Jessica Parkinson.

“Our team is athletic,” said head coach Craig Percevault. “We want to get out and run when we can, be able to play on the half court if necessary.”

Kodiaks coach Ross Tomlinson said he still has an idea of ​​the type of team he has and the style he will use to bring out the best in them.

Sue Sands said her team faces a huge learning curve as younger players shake off the rust and senior players adjust to the pace of competition without the benefit of their Grade 11 season.

As a result, she says, her expectations are realistic, with an emphasis on having fun and building confidence on the pitch.

“We’re a fun, game-loving, game-loving bunch that wants to get in the game and get serious,” Sands said. “The love of sport is there.”

Key players are seniors Hyewon Hwang and Liepa Bajarunas, whose passion and athleticism have set a good example for the young players on the team, six of whom are still in their 9th grade.

The veterans will be supported by strong juniors, including 6’2″ Natalie Curley, 6′ Nicole Hughes and 5’9″ Alexis Hart, as well as young talents Avery Sussex and Jorja Hart holding the backcourt.

Still, Langford is careful to temper his enthusiasm given the backdrop of the new COVID variant and the growing number of infections.

“COVID is not over, and every game played will be a bonus,” he said.

Mike Carkner said his group is determined to succeed.

Not only do they want to make up for their 52-point loss in the 2020 Finals, but they also carry the brunt of the loss of one of their beloved teammates, Karin Khuoung, who succumbed to cancer last year.

“It was debilitating, incredibly painful and so sad all at the same time,” Carkner said. “Our girls have talked about playing this season the way Karin lived her life, with no regrets. We will give everything we have on the pitch to honor Karin.

To achieve this, Carkner said his players will use speed and aggression to attack opponents in transition and batten down the hatches on defense. On offense, they will move the ball quickly and look for success from the three-point arc.

Leadership will come from main point guard Cerys Merton, who has already committed to the University of British Columbia for next season.

“She really wants to win,” Carkner said of the team captain. “Cerys will rise when it matters most.”

She will be supported by key players, shooter Lauren Clements and Taylor Matthews, who bring speed and power to both ends of the court.