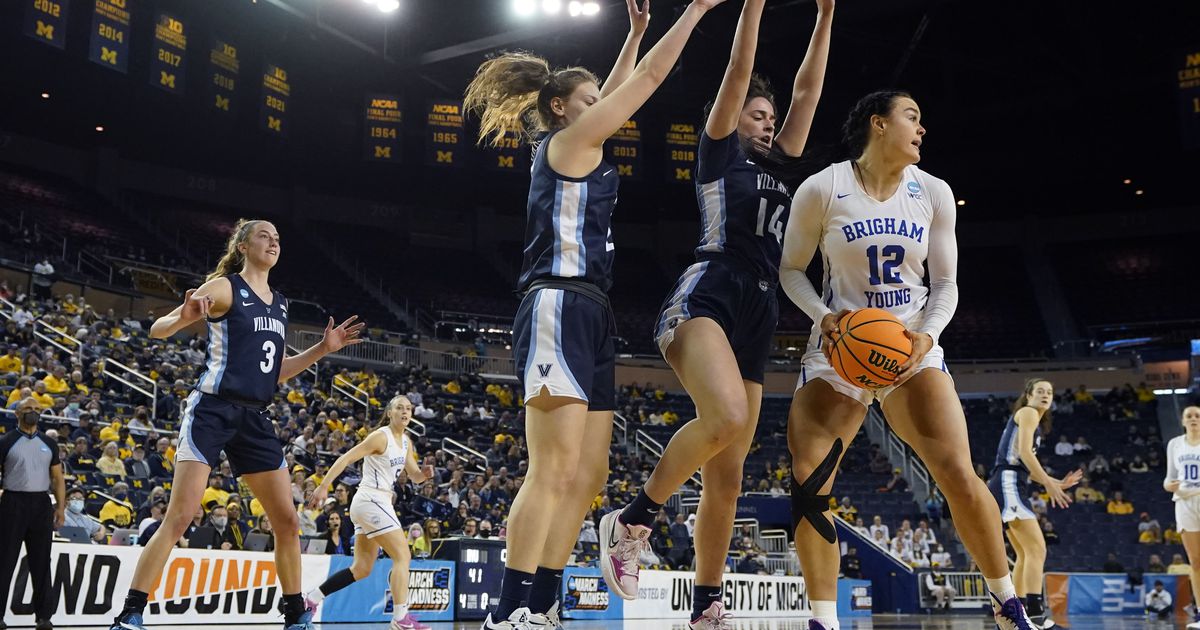 The men’s and women’s teams have many new players.

(Carlos Osorio | AP) BYU forward Lauren Gustin (12) looks for a pass as Villanova forward Brianna Herlihy (14) defends during the second half of a college basketball game in the first round of the tournament NCAA on Saturday, March 19, 2022, in Ann Arbor, Mich.

A recent conversation between BYU basketball players Trey Stewart and Dallin Hall ended with the freshman pontificate over “Star Wars” fan theories. So Stewart thought it would be a good idea to start a “Star Wars” movie night and watch them in chronological order.

The activity became a way for the BYU men’s basketball team to bond. There are 12 new players on the Cougars this season — some returning missionaries, some transfers, some freshmen — and they want to put themselves in the best position to win a West Coast Conference championship and qualify for the tournament. NCAA.

With a brand new team, anything that can help speed up the camaraderie is welcome.

“I think something as silly as that, like a ‘Star Wars’ movie night, is a cool way to get the guys together and find some common ground and laugh and have fun,” said assistant coach Kahil Fennell.

Movie nights have been hits with Hall, Tanner Toolson and Tanner Hayhurst, all of whom consider themselves big fans of the franchise.

“We could talk about this for hours,” Toolson said.

But not all gamers have been indoctrinated into the world George Lucas has built. Freshman Braeden Moore said he went to a few screenings and “loved” the franchise, but wasn’t as invested as some of his teammates. Junior Noah Waterman only attended one screening.

BYU’s women’s team has a similar challenge. After losing several key leaders from last year’s squad and welcoming a new coaching staff, the women have found all sorts of ways to bond.

The team eats together after most practices, junior Lauren Gustin said. New coach Amber Whiting said on the first day of practice she cooked the team’s eggs and healthy pancakes, walked through what she calls her pillars of confidence and had a chat with the players.

“We just spoke together and I made sure they were vulnerable at that time and whatever we said in that space was protected,” Whiting said. “That’s how I want them to feel in the locker room, how they feel when they come into the offices, how they feel on the pitch so that they have that in us and they have that confidence.”

And recently, everyone retreated south to St. George, where they rode jet skis, lay in the sun, and played various one-minute games to win.

But the bonding activity the women seemed to remember most happily was a karaoke night where each class had to perform a song together.

Gustin, Kaylee Smiler and other older players sang Carrie Underwood’s “Before He Cheats” while wearing cowboy hats and boots and flannel shirts, and carrying baseball bats. Younger players like Amanda Barcello and Emma Calvert sang “Let Me Love You” by Mario.

The coaches also showed off their vocal talent. The entire band, led by Amber Whiting, sang “Kokamo” by The Beach Boys.

“It was really fun to get up there and be with the girls and watch the coaches embarrass each other,” Barcello said. “It was a very good moment of complicity.”