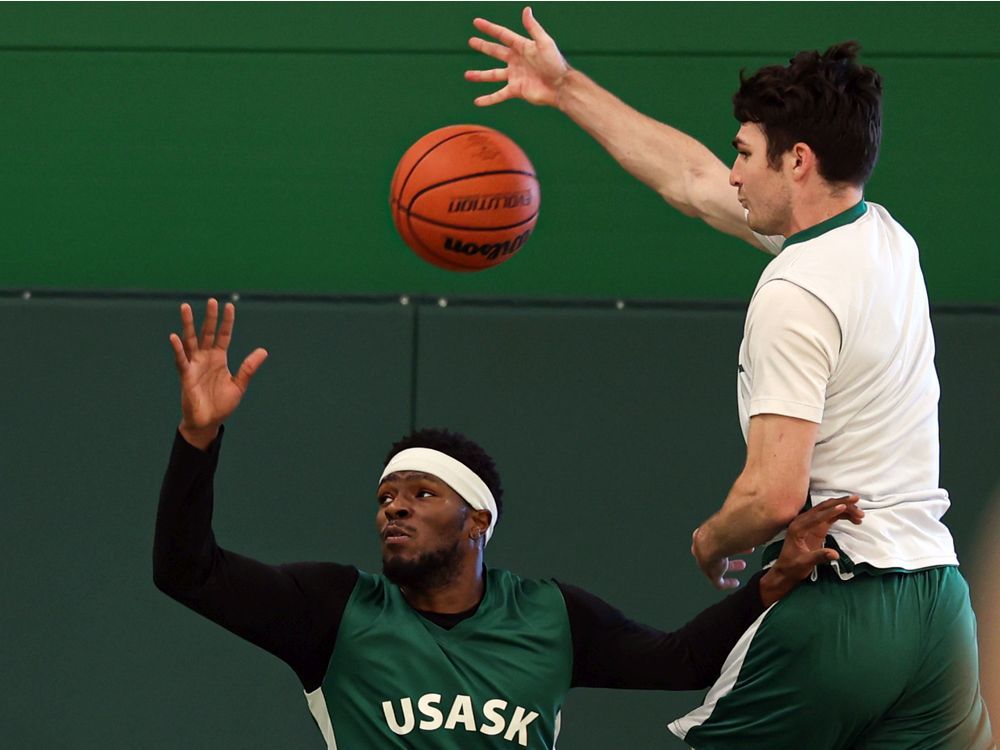 ‘Itching to play’: U of S Huskies basketball teams set to return to Canada West play

These days, Barry Rawlyk can’t help but feel stuck in the movie Groundhog Day, where he’s reliving the same thing over and over again during the COVID-19 pandemic.

The good news is that the University of Saskatchewan Huskies are about to escape their mid-season hibernation as they prepare to resume the Canada West conference game this weekend against the Brandon University Bobcats visiting the Physical Activity Complex.

However, once again, it does not appear that fans will be allowed to watch the game in person on the U of S campus.

The women’s matches are scheduled for 6 p.m. Friday and 5 p.m. Saturday, respectively.

Men’s games are scheduled for 8 p.m. Friday and 7 p.m. Saturday.

“I guess we’re going into this weekend with a bit of caution,” said Huskies men’s head coach Rawlyk, whose Saskatchewan team enters the second term ranked No. 9 in U Sports men’s basketball with a 5-3 record in the Canada West conference.

“We’ve been out for so long and these are our first games back. We hope we are ready to ride this weekend. We don’t know until we face another opponent.

Brandon comes in with a 1-9 record, but don’t judge this book by its statistical coverage.

“It’s a talented team — they have real talented players,” Rawlyk said. “We have to make sure that we are going to play the way we want to play rather than playing their way because if we play their way it can become an uphill battle.

“I think controlling the pace of the game is going to be extremely important.”

The Huskies have expanded rosters this season. This should help mitigate any loss of players who are put into COVID protocol.

The Huskie women’s team has 16 players on its roster. The men’s Huskie team is 18.

“We have a really good group of kids,” Rawlyk said. “We’ve had players in and out of the line-up, so hopefully we’ll be relatively healthy this weekend.”

There’s no roster change for either team as the Huskies deal with Omicron’s recent surge, adding to the uncertainty on a weekly basis.

“I’m really, really happy with our guys,” Rawlyk said. “They were really responsible in terms of social behavior. They’ve been really good that way. We have a very strict testing regimen here on campus, and in fact our team has gone above and beyond the normal protocol of a few times a week. We test three or four times a week.

“We were lucky that way, because we stayed relatively healthy. We hope this can continue. »

STOP OF OTHER CONFERENCES

Meanwhile, Ontario University Sports, Atlantic University Sports and the Quebec Conference (RESQ) have all suspended play indefinitely due to the Omicron surge and COVID-19 restrictions in their respective provinces. .

Canada West elected to resume play after the holiday break, but Huskie teams canceled exhibition games that had been scheduled during the Christmas break.

“We haven’t had a chance to play another opponent since December 4,” Rawlyk noted. “I hope it doesn’t take us too far, but we will find out.”

U of S basketball teams each have eight games left on the Canada West regular season schedule.

Saskatchewan (8-0 this season in the Canada West conference) is ranked No. 1 in the country for U Sports women’s basketball.

“The team has been back in practice since Jan. 1, so everyone is looking forward to playing,” Huskies head coach Lisa Thomaidis said Wednesday.

“We’re very excited to get back out there and compete against another CanWest team. Most of U Sports has been shut down, so we feel lucky to have the opportunity to come back and see how we’ve progressed.

News seems to be flying towards us faster all the time. From COVID-19 updates to politics and crime and everything in between, it can be hard to keep up. With that in mind, the Saskatoon StarPhoenix has created an Afternoon Headlines newsletter that can be delivered to your inbox daily to ensure you are up to date with the day’s most vital news. Click here to subscribe.

We deliver the local news you need in these turbulent times on weekdays at 3 p.m.

Thank you for your registration!

A welcome email is on its way. If you don’t see it, please check your spam folder.

The next issue of Saskatoon StarPhoenix Afternoon Headlines will soon be in your inbox.

We encountered a problem during your registration. Try Again