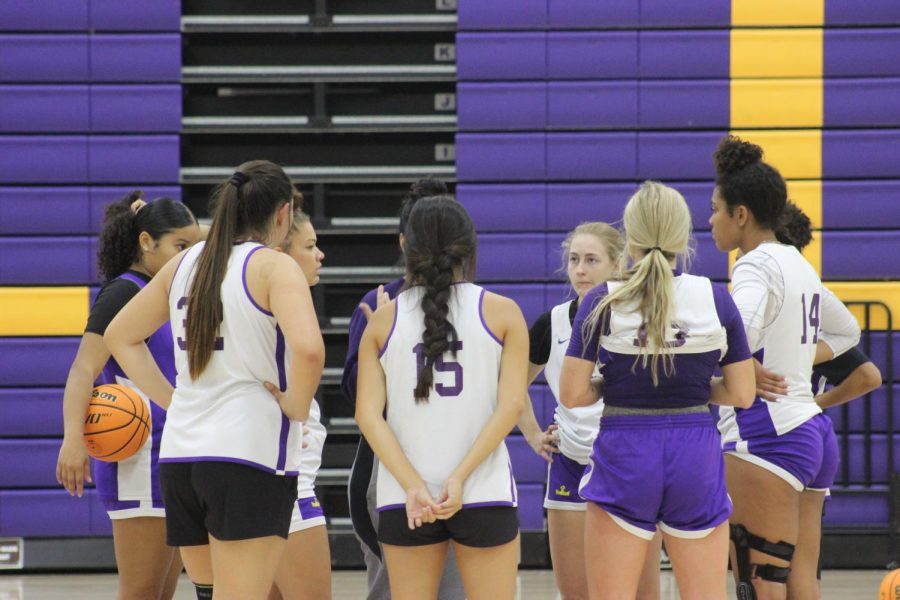 The Regals’ first game of the season is an exhibition on Saturday, November 12 against Hope International University away from home.

With the California Lutheran University basketball season approaching, the men’s and women’s teams have begun practices for their upcoming games, and coaches aim to move quickly into the new season.

“I think they are good, I like them. How do they play? I mean, they learn, they understand things. I like the effort, I like what we do. We’re getting better, that’s what we all want as coaches,” said men’s basketball head coach Russell White.

Apart from the general transition, the coaching staff also tries to avoid setbacks, such as injuries and illnesses.

“I’m always worried about injuries and staying healthy and COVID because last year we had some tough times but no I think this team is pretty warm and tough so I think they overcome these injuries and mentally I think they will stay tough,” said women’s basketball head coach Kelli DiMuro.

The coaches are not the only ones looking to the new season with concern as key players in the men’s team have graduated. However, players from both teams are more optimistic than anxious.

“We have changed a lot. With the loss of our seniors, we’re losing a few guys that average around… 20 points each and then we lost another captain, so we’re really trying to revamp our culture and take it from a great team of scorers, because we know we can do it, but also to bring in a great defensive team,” said senior center Miles Houston.

Having had a few practices now, new players to the Regals basketball team understand the games better and returning players are taking on more of an advisory role.

“I’m really excited for this season. We have a lot of new talent and I feel like our chemistry this year is really good. Obviously it’s still early, we’re only in our third week… of training now, so we’re working a lot, but the competitiveness in training has been really good and we’re getting better. We have a lot of hard workers and high achievers, so I’m hopeful we’ll go far this season,” junior forward Naomi Gipson said.

One of the players taking on this mentoring role is lead point guard Ashley Sahnazoglu.

“Well, coming in as a senior, taking that captain/leader role a little more seriously, trying to be that person that everybody can come to on and off the pitch, making sure everybody is held accountable, because I think that will lead to a successful year for us,” Sahnazoglu said.

As the season is fast approaching, the coaches are keeping an awareness of the players the team has lost and making sure the current squad is prepared in all aspects.

“Last year we lost two all-conference players. They graduated, so we have to figure out how to replace them, but we have a good core coming back and I think we expect to be very competitive, but we you never know,” White said. “So we’re very, very optimistic, but also understand that it’s a really good league and things can happen that make it more difficult, so we have to be ready for everyone. the challenges that come our way – physically, mentally, the things we control, the things we don’t control, we have to be ready for anything. But we’re certainly excited about the potential.

The Kingsmen were undeterred by the tough practices and, although they weren’t able to begin official practices until October 15, per National Collegiate Athletic Association guidelines, they made the most of their pre -season.

“Honestly, it’s been a chore, but it’s something that, being a senior, I’m used to. But that’s what I love because the best part of coming back in the season is seeing all the guys come back together and being able to practice,” Houston said. “So it’s been a chore but it’s been fun.”

The Regals also worked during practices trying to not only focus on the game, but also on each other by creating a sense of unity on and off the pitch.

“I mean, with any season, I think sometimes there are lows, there are highs, but I think what’s important during those lows is to stick together and get through this. together because we win and lose as a team. So I’m sure, I mean it’s not always going to be great all the time, but if we can stick together then we can get through those lows and enjoy the highs even more.” , Sahnazoglu said.

Going forward, the coaches try to keep in mind the upcoming matches in the face of fierce competition.

“Well, our league is very good, so all the teams in our league are competitive. Pomona-Pitzer is already ranked in the top 15 in the country, so we know they’re going to be good, we know there are other teams that are going to be really, really good. So I don’t think there’s anyone in particular that concerns me or concerns us, but they all do,” White said.

The Kingsmen’s workouts mainly focused on training their early years and honing players back on the pitch.

“Other than the new guys, for the most part everything is the same, but we’re teaching the guys new things and trying to improve as the comebacks try to improve on what we were doing last year and being just more experienced and more mature on the basketball court and see what we can do,” said lead forward and shooting guard Logan McCullough.

White’s efforts to prepare the Kingsmen for the season did not go unnoticed by the players and were highlighted by Houston.

“With the work that we do and what we do every day in practice, Coach is really fair, helping to propel us to get there,” Houston said.

As the Kingsmen continue to work and train, White is confident in the team’s chances of qualifying for the Southern California Intercollegiate Athletic Conference tournament, despite the season still not having started.

Along with training at the gym, the Kingsmen also practiced in their spare time to hone their skills.

“I prepared all summer. I worked, on and off the pitch, mentally and physically and since we’re at the start of the season I just put in some extra shots afterwards and try to keep the guys positive,” said McCullough.

The Kingsmen are hoping to bring home wins to Cal Lutheran. McCullough said he thinks if the team comes together, does the right things, listens to the coaching staff and stays positive, good things will come.

Apart from practice and training, the Regals also worked on their communication and chemistry with each other.

“I’m trying to make things lighter, airier, trying to get them to care about each other more than anything and build relationships and I think that will respond better on the pitch with chemistry,” said DiMuro.

The Regals’ biggest concern at the start of the season is the lack of experience on their side, but they recognize that’s something they can tackle.

“Only, maybe because we have a lot of young girls in the team, just that experience, but even so far I feel like we all have a lot of respect for each other and that we work well together, so I think we’re going to be able to do very well,” Gipson said.

The Cal Lutheran Regals enter the season with a sense of optimism as Gipson continues to regain his form after injury.

“I come with a lot more confidence. Last season was my first season coming back from an ACL injury, so I really tried to push myself to get back to the way I was playing, so running on the floor, driving, looking for my shot, being confident in those movements I make,” Gipson said. “And also come with a positive attitude, you know, I’m an upper class man and I’m just trying to step into this leadership role and set a good example and give everyone positive affirmations, You know.”

The Regals are ready to take on the new season, and Sahnazoglu said the chemistry between the team members was high as they bonded well.

The Regals coach also believes they are linked to SICAC.

Cal Lutheran’s basketball season started in November and will run through the spring.