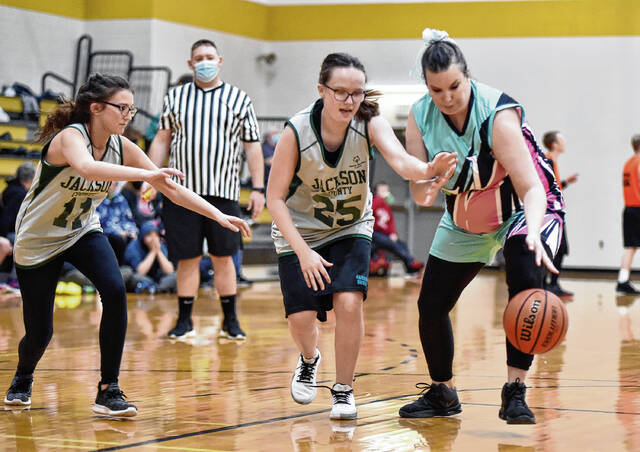 From Oolitic to Shelbyville, Special Olympics Indiana Jackson County basketball teams battled it out on the court.

The rosters for the state tournament are due Monday, so coach Jim Shepherd has been working hard to make sure the five-on-five tornadoes and three-on-three tsunamis, cyclones and hurricanes meet all the requirements to make the playoffs. playoffs.

So far this season, the Tornadoes are unbeaten at 3-0. They will hope their record will remain unblemished after playing two games against Monroe County on Sunday at Seymour Middle School.

After opening the season with wins over Johnson County and Washington County on Jan. 8 in the Seymour Noon Lions Club Tournament at SMS, the Tornadoes traveled to play Shelby County on Feb. 9 at Shelbyville High School.

After trailing 6-0, Jackson County rallied to take a 12-10 halftime lead. AJ Engel then started the second half with layups on steals from Tim Ashburn and Josh Beals, and a James Knight field goal gave the Tornadoes an 18-12 lead going into the final quarter.

Thomas Emly opened the fourth quarter on a 6-0 run to overtake the Rebels, and Ashburn scored the Tornadoes’ final field goal and they won 26-16.

Engel led all scorers with 12 points, followed by Emly with eight and Beals, Ashburn and Knight with two each.

The public is invited to attend the games. Voluntary donations will be accepted at the door to benefit the Jackson County program.

As for other Jackson County teams, the Hurricanes are 2-2 this season after beating Bartholomew-Brown-Jennings and losing to Decatur County in the Lions Club tournament, then falling back to Decatur County but beating Boone County on February 12 in the Arnie Petre Basketball Tournament at Shelbyville High School.

In another close battle with Decatur County, the Hurricanes had a 12-10 lead on Averie Brennan’s third field goal. Then Decatur County went on a 6-0 run and held on for a 20-14 win.

Against Boone County, Nevaeh Ackeret made back-to-back baskets for a 14-6 lead, and Brennan turned that into an 8-0 run at Jackson County with two baskets. Hamm added the final basket to end the match at 20-6.

Hamm and Brennan each scored eight points, and Ackeret had the other four points.

Brennan said she had a lot of fun playing with her three teammates.

She said she really enjoys being part of a great group of people who support her, keep cheering her on, and are always there to help her build her confidence.

“I couldn’t imagine being involved in any other band,” she said.

For his efforts against Boone County, Brennan received the Arnie Petre Tradition Spirit and Sportsmanship Award. Ackeret received the award after the Decatur County game.

“I didn’t expect to receive any medal that day. It definitely came as a surprise to me,” Brennan said. “I was so happy when I was told I was going to receive the sportsmanship medal. I felt so honored to receive such a great medal as the one I received. It always makes me feel good inside when I know I’ve done something great.

She is also proud that her teammate was honored.

“I feel like she deserved it,” Brennan said of Ackeret. “Even though she is the youngest player in our team, we all love playing with her and having her in our team.”

Whenever she’s on the field, whether it’s a practice or a game, Brennan said sportsmanship means more than just being part of a team or group.

The Jackson County Tsunamis are now 2-4 this season.

Three days later in Shelbyville, the Tsunamis picked up an 18-10 win over the Shelby County Blazers. Hickman led with 10 points, Bennethum scored six and Noble had two.

Finally, the Jackson County Cyclones are now 0-6 this season.

They battled but lost both Lions Club tournament games and three games to Lawrence County. These latter scores were 20-6, 20-4 and 21-4. That day, Becky Klosterman led with six points, and Montana Casto and Kayla Kriete each scored four points.

In Shelbyville, they lost 14-6 to the Shelby County Vipers. Kriete scored four points and Klosterman added the other two.

Going forward, Jackson County teams will focus on practices to prepare for the playoffs.

“I can’t wait to see how our teams continue to evolve throughout the season and what kind of teams we will be at the end of it,” Brennan said. “No matter the results, I will always be proud of how we all turned out and how we all came together.”