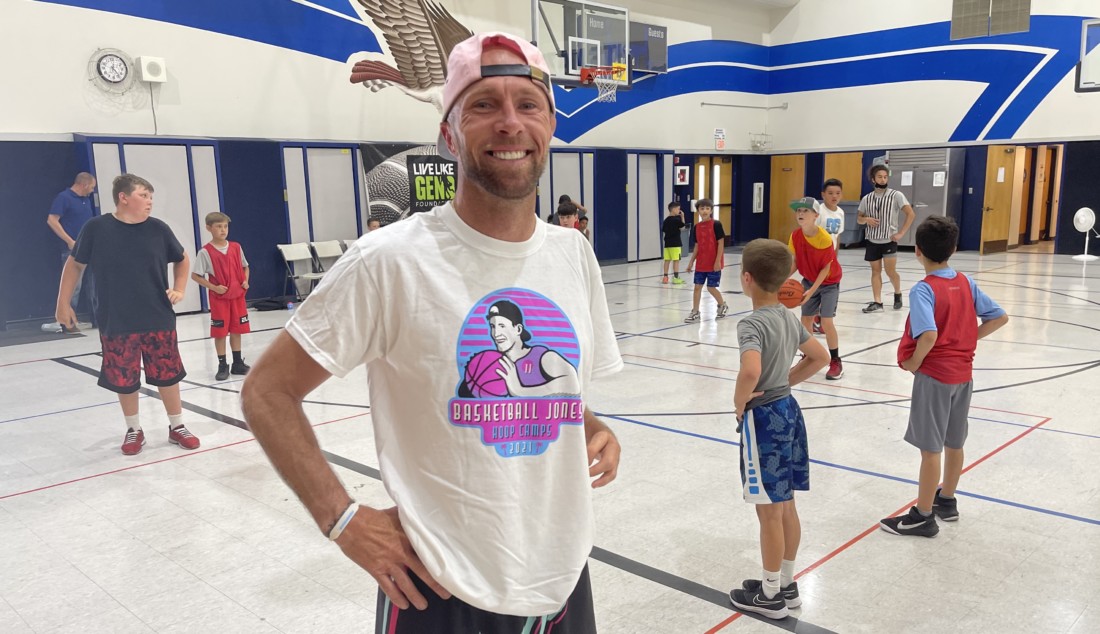 Local youth have the opportunity to improve their basketball skills

The heatwave of the last week made will not prevent 85 young athletes from attending June 14-18 Jones basketball Hoop Camp at Maze Middle School, the second of 11 basketball camps the organization is running this summer.

Returning Chase Connelly, 15, has been coming to the camp for four years, first at age five and then again for the past three years.

“I love the passion they bring to the program,” said Connelly. “Every day they come with a lot of energy and I love how exciting it is. You work with kids that you don’t really know and have to adjust to the way they play, which is good practice. . I learned a lot of things, from fundamentals to complex dribbling moves, and how to play the game energetically. It combines learning and fun and this is the best camp I have ever been to.

One of the parents who is happy to support the program is San Benito High School Head Football Coach Bryan Smith. Her son, Cadence, has been attending the camp for four years.

“Each year, they do a great job of keeping the kids active,” Smith said. “My son loves it. It’s a long day for him and he comes home tired but he loves it. Coaches do an amazing job providing energy and positive reinforcement. There is a ton of ‘Geno’ in this camp.

“Geno” was Gene Cotter, who founded the sports organization based in Hollister, Humboldt County in 1996 with his brothers Ed and Will Cotter. Over the past 25 years, they have run over 275 camps for boys and girls ages 6 to 15, teaching basketball skills, teamwork and sportsmanship.

It’s a fast-paced, intense program that takes what a normal athletic program does over the summer and sums it up in just five days, allowing kids to jump from 9 a.m. to 3 p.m.

“We start with a general warm-up that leads to some games,” said operations director Ace Koski. “We have coach sketches where the kids get together and do basketball drills around a cinematic or theatrical element. We have three-on-three sets that put different rules on them, and then they play eight five-on-five games before a final tournament on Friday. “

There is an 8: 1 ratio between campers and coaches and the staff is a mix of varsity players, high school coaches and pro players who deliver a level of talent that kids aren’t likely to get in a community program. The program is proud of its success rate, as over 10,000 campers went to basketball in high school and more than 70 went to college ball thanks to scholarships.

Koski, who was born with a deformity in his left arm and left ear, has been in the program since first year. He met Gene Cotter playing basketball at a gym in Willits and was offered the chance to teach at one of the camps.

“Geno said, ‘Do you want to come to the camp to meet my children?’” Koski said. “You have a gift that would inspire them, you were born a little different. You have a message I want them to hear. I went upstairs one day and decided I wanted to do this job for the rest of my life. I came as a guest but he made me feel like I was part of something bigger than me. Geno was like that – he found people who maybe had a bit of broken glass in their lives and helped them celebrate their differences.

The love of sport and the love of teaching as exemplified by Cotter is a theme throughout the program.

“His networking, his energy, the way he brought people together for the sake of the children and his passion for everything they did was something special,” Koski said. “I owe a lot of my life to how he made me feel and I want to continue that essence he had, helping children who are underserved.”

Her death in a car crash on Route 156 at Lucy Brown Road in 2016 prompted the organization to switch to nonprofit. Live Like Geno Foundation, who works to give back to the community on Cotter’s behalf. In addition to Basketball Jones, projects include building or relaunching open basketball courts (such as the restoration of McCarthy Park in Hollister in 2019) and awarding six $ 500 scholarships to selected boys and girls in Hollister, Gilroy. and Humboldt every year.

The camps could not take place last year due to COVID. The current program has been carefully designed to minimize risk to participants, with daily temperature checks, equipment disinfection, contact tracing, and maintaining stable cohorts. Even with these precautions, attendance is down from the usual 120 children who normally attend.

While the Hollister camp is over for this year, there are upcoming camps in Aptos, Campbell, Los Gatos, Salinas, Santa Cruz and San Jose. They will also be hosting their very first girls’ camp later this year in Carmel.

In addition to the spring / summer camps, Basketball Jones also runs two-day winter skills and drills camps. Next year, they will be hosting travel teams with their Amateur Athletic Union program between February and May, with trials starting in January.

The cost of the programs varies, but Koski says financial assistance is available for parents who cannot afford to send their children.

“Thank goodness we never had to turn anyone away,” he said. “We have a great program through our foundation for people who need it, and we try to meet the needs of children who otherwise wouldn’t be able to come. “

BenitoLink is a non-profit news site which reports on San Benito County. Our team works around the clock during this time when accurate information is essential. It is expensive to produce local news and community support is what keeps the news circulating. Please consider supporting BenitoLink, San Benito County News.