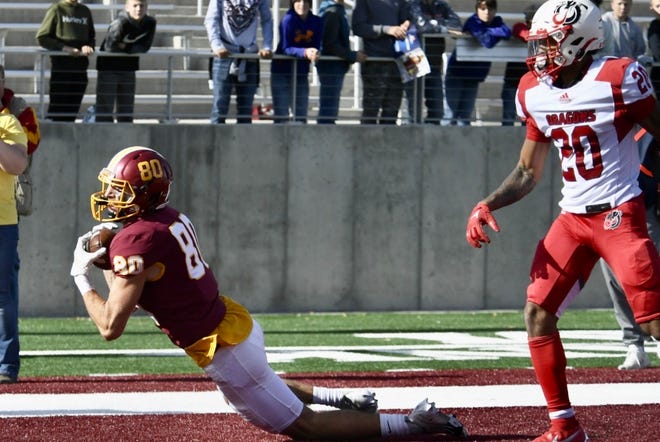 Although there is no playoff or division title for the Northern State University football team, Wolves still have one game.

They will face the University of Minnesota-Duluth at 1 p.m. Saturday at Dacotah Bank Stadium to wrap up the season.

The game is Northern’s chance to end the season on a high against one of the best teams in the Northern Sun Intercollege Conference. The Bulldogs are 7-3 and coming off a win over Augustana last weekend in Sioux Falls. At 4-1 in the NSIC North Division, they still have a shot at winning the division title, although Bemidji State (8-1 overall) is set to lose on the road to the University of Mary.

Three Bulldog quarterbacks attempted between 71 and 78 passes this season, but last weekend it was Kyle Walljasper who led Duluth with 207 passing yards and 81 rushing yards. Walljasper is the team’s second-best rusher with 716 yards. Running back Wade Sullivan leads the way with 734 yards. The Bulldogs have 2,251 net rushing yards this season.

Northern’s defense has generally been a force this season, but Duluth’s has been dominant. He’s held opponents to an average of 19.9 points per game and allowed just 717 net rushing yards this season, with opposing running backs averaging a paltry 2.6 yards per carry. The Bulldogs have 38 sacks resulting in 277 yards lost.

A win for Wolves would mean a 7-4 record on the season, momentum heading into the offseason and sending a group of seniors off with a win. And it would be another step in coach Mike Schmidt’s work to make Northern a permanent contender in the NSIC.

Bent Aldridge became the winningest volleyball coach in Northern State University history when Wolves defeated Bemidji State University in four sets on Sunday. It was his 224th win at Northern.

Wolves are 18-10 this season and 13-7 at NSIC. They play Concordia-St. Paul at noon today in the first round of the NSIC tournament. The game is in St. Paul, Minn.

Northern State’s men’s team opens the season with a pair of games this weekend. The Wolves play the NCAA Division II No. 1 team at Southwest Missouri State at 5:30 p.m. Friday in St. Joseph, Mo. On Saturday, they face Western Missouri State. at 7 p.m., also in St. Joseph.

The women also have matches on Friday and Saturday in Moorhead, Minnesota. The Wolves face Central Missouri at 8 p.m. Friday and Rogers State at 5 p.m. Saturday. Northern beat Division I North Dakota 81-75 in an exhibition game Nov. 2.

After opening the season with three bouts, the Northern State wrestlers head into their first tournament of the year on Saturday. They will travel to Mitchell for the Dakota Wesleyan Open.

Wolves opened the season with a 47-3 win over Carl Albert State College on Friday in Midland, Okla. In their second game of the day, they fell to No. 4 Central Oklahoma, 30-3. Northern fought Concordia-Moorhead on Thursday night in Minnesota.

The Northern State University cross-country teams will then compete in the regional meet Nov. 19 in Joplin, Mo. The NCAA II national meet is Dec. 3 in Seattle.

On the women’s side, Wolves took eighth place out of 16 full squads. Jennifer Clark was the best in the North in 31st place with a time of 23:31.89.

Seven Aberdeen Roncalli football players have been named to the Conference All-Northeast squad.

The Cavaliers finished the regular season 8-0 and captured the Northeastern Conference title. They finished the season 9-1 after falling to Hot Springs in the playoffs.

The full team of all conferences follows.

The Aberdeen Wings return home for two games this weekend

The Wings are 8-7-1-2 this season, good for fourth place in the Central Division. They could move up the standings as the Bulls are only one point ahead of Aberdeen.

The Presentation College football team could end the season with four wins if the Saints can win Saturday at Dickenson State University in North Dakota. But it won’t be easy as the Blue Hawks, 7-2 and 5-0 in the North Star Athletic Association, are ranked 18th in the latest NAIA poll. Kick-off is set for 1 p.m.

Earlier in the season, the Saints snapped a 23-game losing streak. So this season has been a positive step, no matter what happens over the weekend.

In their final home game on Oct. 29, the Saints beat Mayville State University 21-0. Quarterback Tim Evitt threw for two scores and Billy Nelson opened the second half with an 85-yard punt return for Presentation, which scored all of its points in the third quarter.

The basketball season has already started for the men’s and women’s Presentation teams.

The men were 1-3 going into Thursday night’s game against Jamestown University, ranked No. 9 in the nation at the start. Next up is a Friday game against Oak Hills Christian College at 7:30 p.m. Friday at Strode Center on campus.

On the women’s side, the Saints were 0-4 heading into a Thursday night game at Briar Cliff. Their next game is Sunday at 2 p.m. at St. Cloud State in Minnesota.

The Presentation College volleyball team plays Dakota State at 10 a.m. this morning in the North Star Athletic Associations Super Six in Watertown. The Saints are 9-21 this season with a 6-8 conference record.

The Saints are the sixth seed and Dakota State is the No. 3 seed. The winner advances to the semifinals, which are also Friday. The championship game is Saturday at 2 p.m. at Watertown Civic Arena. A full program follows.

Winners of the semi-finals at 2 p.m.