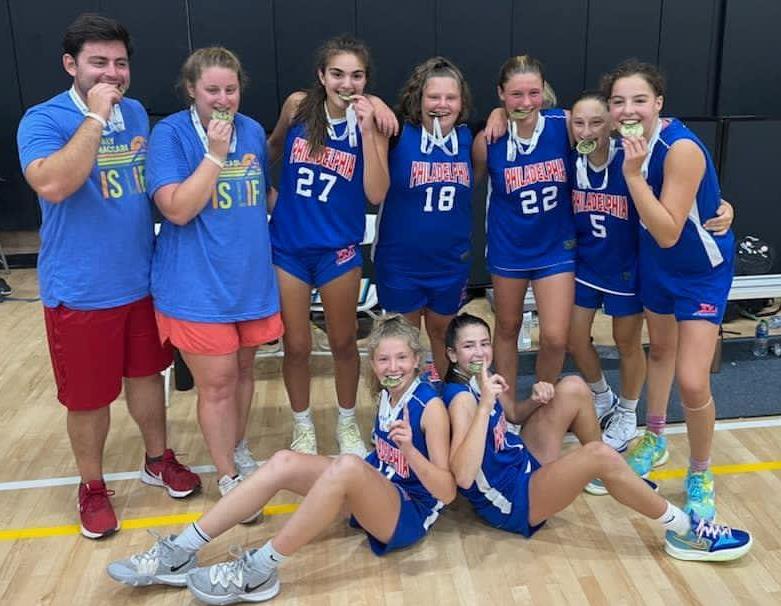 The Philadelphia Women’s Under-16 Basketball Team won a gold medal at the recent 2022 JCC Maccabi Games in San Diego.

The Philadelphia team got off to a fast start in their opening round game against Miami Beach, using an early 32-6 run to win 71-56 and set up a semifinal against No. 1 seed LA Westside .

In the semifinals, the Philadelphia team pulled off a gutsy 51-47 victory to advance to the gold medal game against No. 3 seed Fort Lauderdale.

Philadelphia head coach Sarah Sherman said, “The city of Philadelphia knows one word: underdog. We embraced the feeling of having others who don’t believe our city can achieve remarkable feats.

Fort Lauderdale, a tall physical team, took an early lead, but the Philadelphia team fell back and won 67-63 with a brave and determined effort.

“Coming into the medal round as the top four seeds, we knew we had our work cut out for us, but we really came together as a team and executed the game plan,” said the Philadelphia point guard. Tessa Lozner. “I’m so proud of us for playing hard and winning the gold.”

Philadelphia guard/forward Darby Chhabria said, “Playing with my teammates and winning gold with them during my time in San Diego is something that will always mean a lot to me. Having overcome adversity throughout the tournament, it was an experience I will always be grateful for.

The Maccabi Games are an experience for Jewish teenagers to meet and befriend other Jewish teenagers from around the world. These games are important for everyone involved as they bring the Jewish community together for competition, without losing sight of the importance of sportsmanship and rachmanus. Sherman said, “The Philadelphia 16U women’s basketball team left for San Diego as strangers and came home not just as champions, but as family.”

FacebookTwitterLinkedinMix
2022-08-29
Previous Post: “Now see Nurkic has basketball skills unlike Giannis”, “Nurk heard y’all talking shit about him not being a top 10 center in the NBA”
Next Post: Homeless teenager lands college spot with his basketball skills