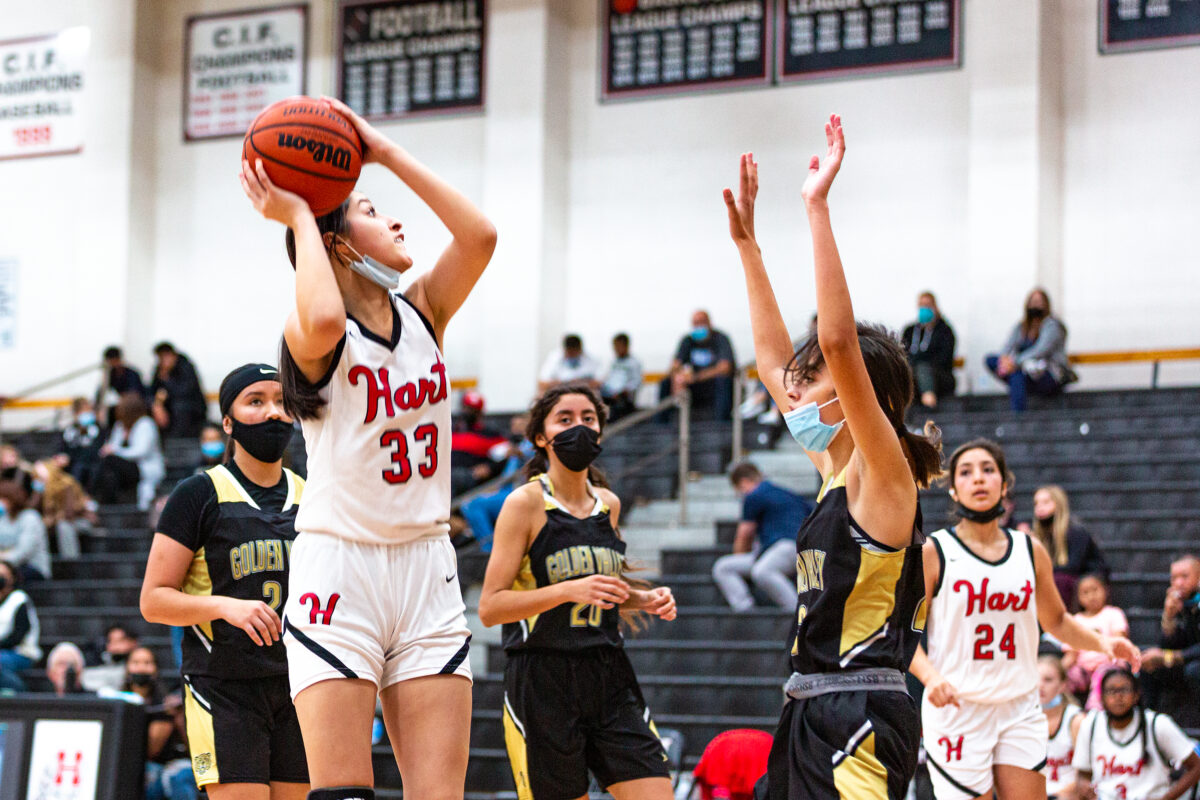 In the midst of the winter break, the Santa Clarita Valley sports teams aren’t slowing down as they continue to prepare for the Foothill League game before the second half of the season.

Burroughs High School hosted a tournament starting Dec. 27 with four SCV girls’ basketball teams competing against schools of all sizes across the state. Here is an overview of the schools’ performance during the tournament.

The Saugus Centurions (10-7, 3-1) got off to a slow start after their Foothill League title but appear to have found their place, winning four of their five games in the tournament.

“We shot the ball a lot better,” said Centurions head coach Jason Conn. “The girls seemed to be focusing a lot better in this tournament, which will help us move into the Foothill League. Our starting point guard Victoria Phan was out nine of the first 10 games, so getting her back was huge for us. ”

Beginning December 27, the Centurions defeated Santa Paula 61-40 and Grant 76-19. The Centurions would continue their momentum until December 28 against Sylmar, beating them 70-31.

On December 29, the Centurions would calm down but remain close in a 44-43 loss to Taft. The Centurions ended their tournament on a high note, beating Agoura 34-32.

The Hart Indians (12-4, 2-0) currently sit number one in the Foothill League table and haven’t slowed down in this tournament. The Indians wanted to stay consistent, and head coach Jerry Mike believes they did just that.

“We played basketball consistently against different levels of competition,” said Mike. “Our defense has been the most constant force for us. We have shown that we can make the other team’s goal very difficult and we want to continue that way. ”

The Indians started the tournament with a resounding 55-38 victory over Verdugo Hills. The next day, the Indians would lose to Santa Monica, 48-39. The swing of wins and losses would be the common theme for Indians.

The Indians followed their loss with a 68-14 victory over Santee the next day, but lost to Chaminade the same day, 59-56. In the last game of the tournament, the Indians finished on a high note with a 52-45 victory over Trinity.

The Trinity Classical Academy Knights (7-5, 2-0) are the defending Division 5A champions and have made the effort to play against top division opponents. The tournament would provide the level of competition that head coach James De Monbrun was looking for.

“We wanted to challenge ourselves against good teams,” said De Monbrun. “Playing against competitors like Hart was a big deal for us being a small school. Either way, we take each opponent one game at a time. Go through the process of watching a movie, setting up the game, and starting all over again. ”

The Knights started the tournament with a 48-44 victory over Taft and were led by Lily Caddow with 16 points and Katie Brown with 12. Kelly Lotz would end the game with nine points but would continue to score the rest of the tournament. .

The next day, the Knights would beat Verdugo Hills 75-66, powered by Lotz, who finished with 36 points. Caddow, Brown and Emma Schaaf finished with 10 points each. The next day, Trinity would lose to Highland, 56-55, despite Lotz scoring 25 points.

In the last game of the tournament, the Knights faced the Indians and lost 52-45. Lotz would again be in the lead with 19 points, Schaaf finishing with 12 points and Caddow with 10 points.

The Canyon Cowboys (13-5, 3-0) sit just behind the Indians in the Foothill League standings despite not winning as many games as they would have liked. It was a tough program and the Cowboys are not at all discouraged.

“The kids competed and we had a double-digit increase in all three games,” said Cowboys head coach Jessica Haayer. “Learning how to close matches against a difficult group is especially important for us. Despite everything, we played better. We have to stay ready, especially this time of year, and be ready to fight for 32 minutes.

In their next game, the Cowboys would lose again, this time a 59-56 loss to Mira Costa. Garcia would lead the way again with 15 points, eight assists and three steals. Regez would end with 14 points, two rebounds and a steal and Jade Sims would end with 11 points.

In the last game of the tournament, the Cowboys finished on a high note with a 43-41 victory over Santa Monica. Garcia finished with 18 points, five assists, two rebounds and three steals. Regez finished with 10 points, three rebounds, three assists and two steals and Koko Booker finished with four points and eight rebounds.