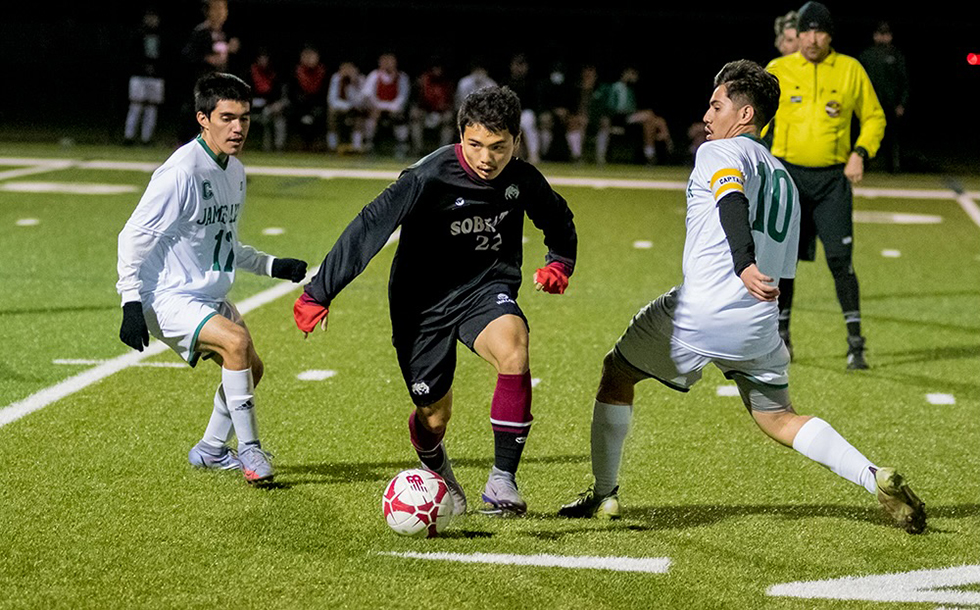 The Sobrato High boys’ soccer team knew from the start of the season that they had the talent to put on a special season.

And that’s exactly what the Bulldogs did, winning a Blossom Valley League West Valley Division championship and earning their first berth in the Central Coast Section playoffs in nearly a year. decade.

“I hope we play smart and physically because I want my last game to be a win,” said Christian Grave, the excellent senior striker who has scored 15 goals and nine assists. “We don’t want to come out too soon and hope we can go all the way. We are excited to play CCS for the first time and it should be a fun experience no matter what.

Sobrato ended up running away with the West Valley Division title, totaling 39 points to easily outrun Gunderson and James Lick, who both finished with 31 points. It was Gunderson who handed the Bulldogs their only loss of the season in fairly emphatic fashion, 5-1 on February 3.

However, Sobrato bounced back from that loss with three straight wins to close out the regular season, outscoring their opponents by a combined 11-4 margin. Even though the Bulldogs have played in a C league this season, they also own wins over higher level teams such as Willow Glen (BVAL division champions Santa Teresa), Overfelt (third in the Santa Teresa) and Hillsdale of San Mateo, the co-champions of the Peninsular Athletic League Ocean Division of League B and top seed of Division III.

“So we’ve had a really good season and it’s really refreshing to be surrounded by so many good players,” said Grave, who has a 4.4 GPA.

Grave was a prolific goalscorer with Paolo Mancera (16 goals, 12 assists) and Jose Gomero (13 goals, five assists). All three can score at any time, and they do so in different ways.

“Paolo sometimes plays striker with me when we go up two up front, and he also plays winger and is phenomenal at both positions,” Grave said. “He is very skilful, thoughtful, always keeps his head up with the ball and I can always count on him to play me a good ball or play him a good ball. They have a very bright future with Paolo in the team.

Midfielder Phi Nyuyen has seven goals and is the rare player who has the ability to completely dominate a game without scoring as he can own the ball and distribute it resulting in time of possession.

“Phi is a big part of our team and every time he gets the ball it’s like magic on his feet,” Grave said. “He’s had a really good season and helps keep our midfield together. He makes really big plays for us, he’s a really nice guy and a team player overall.

Grave and central defender Kyle Chimienti are captains and happen to be cousins. They grew up playing together for various organizations including Orchard Valley, Bay Area Barcelona and the Earthquakes youth teams. Grave has become one of the leaders of the team, a role he cherishes.

He provided a lot of leadership by example, consistently running hard and playing physically. Grave looks bigger than his 150-pound frame, in part because he’s so strong on the ball and possesses the ability to blow through his defender at a moment’s notice. He is particularly dangerous outside where he can make long runs and put pressure on his opponents.

“I really like the ball on the line in space, and I feel like the team recognizes that and plays those balls for me,” he said. “I feel like I’m playing a physical, fast-paced game, and I like to change direction and speed so I don’t get too predictable.”

Even though football has always been Grave’s favorite sport, he loved his first and only year of football last season as Sobrato’s kicker. He was consistent with his point attempts after and showed good range with a few field goal attempts.

“Playing in the soccer team was awesome,” he said. “All the guys in the team welcomed me like family. It was a new experience for me because I had never kicked for a football team before and I did it because I wanted to get out of my comfort zone. And I sincerely wish now that I did it earlier in my high school career. Although it was a very different football experience, I enjoyed both equally and feel blessed to to be surrounded by such great players and teams.

When the Bulldogs lost to Santa Teresa High for the second time in as many league games on Feb. 4, it seemed all but certain that his title hopes were gone.

After all, Santa Teresa only suffered one loss and was heavily favored to win the rest of her contests. Not so fast. With a little help from their friendly Crosstown rivals, Live Oak High, the Bulldogs captured a share of the championship in the Santa Teresa East Division of the Blossom Valley League.

Four days after Sobrato’s loss to Santa Teresa, the Acorns defeated the Saints – sweeping the season series – setting the stage for the Bulldogs to eventually win and finish 8-2 ​​in division play with Santa Teresa. The only remaining team that opposes this happening?

You guessed it, Live Oak. Of course, it had to be so. The Bulldogs (16-6) did their part, beating the Acorns 65-53 in the league final on Feb. 11, winning their first title since the 2016-17 season. It was Sean Tate’s first season as head coach, and five years later the No. 2 title was just as sweet.

“Going into the Live Oak game, we knew if we won, we would be league champions,” Tate said. “And the guys came out and did it. They went out and took care of business. It was fun after the game because all these guys are friends and grew up together and they just want to be with each other.

The Bulldogs won the No. 6 seed in the Central Coast Section’s Division III playoffs and will host the Soledad-Prospect winner in a second-round game Saturday at 7 p.m. Meanwhile, Live Oak (10-12) has an opener at No. 12 South San Francisco (12-12) on Friday.

In the team’s penultimate league game on February 9, the visiting Bulldogs held off a strong Oak Grove side, 59-57. In the final minute, sophomore Trey Miller hit the forward for a 1 and 1 before Oak Grove committed a turnover, sealing a Sobrato victory.

Two days later, the Bulldogs played in front of another crowded gymnasium in Live Oak and thrived.

“The last two games we played, mentally in our mind, were playoff games,” Tate said. “That was our mentality. They’re great games to get us ready for CCS. Those two places were rocking.

Jayden Fowler had 18 points against Oak Grove and 28 against Live Oak, showing why he has become one of BVAL’s best players. Fowler has a good set piece – which is a great skill to have and is rarely used in today’s game – allowing him to shoot quickly and against taller players.

As has been the case all season, the Bulldogs received contributions from all walks of life in the final two games of the regular season. Ethan Marmie had 14 points against Oak Grove, Marc Difrancesco had nine points apiece in the two contests, and Michael Chambers had 10 points and 10 rebounds in the Live Oak game.

In that same contest, Chambers suffered a broken nose.

“He’s a soldier,” Tate said. “Dr. Taylor groomed him to go, got cotton in his nose and he went out there and finished the game. Marc was Mr. Constant and gave us six rebounds a game, and Jayden shoots in pace, which is always nice to see.

After missing a few games due to Covid protocols towards the midpoint of the league season, point guard Andrew Zorio came back strong and did a good job of facilitating and bringing the team into their attack. Tate really enjoyed coaching this year’s group.

“These guys did a great job and they work hard,” he said. “They’re good kids and they like to play for each other, and that’s what makes coaching this team great. The best part about it is that once they move on in life and come back to the gym, they will always see that championship banner.

Sportswriter Emanuel Lee can be reached at [email protected]