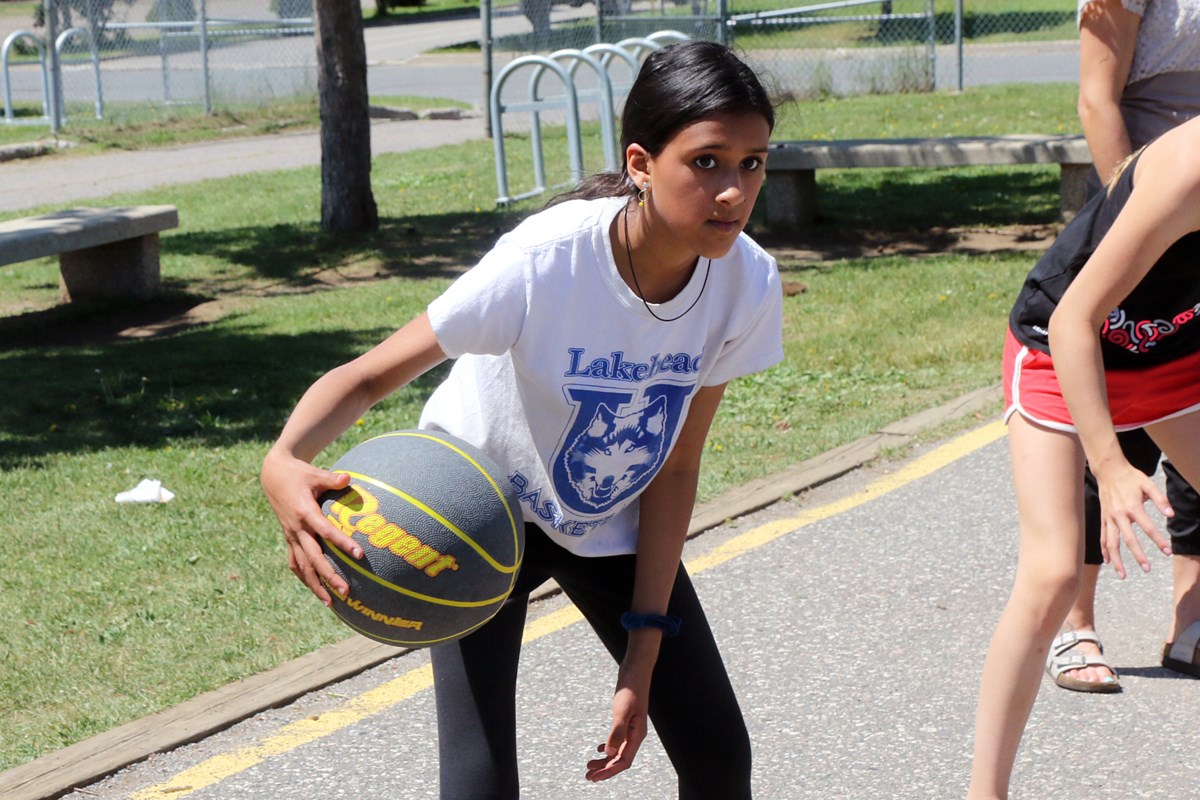 THUNDER BAY – Sara Yaseen is only 10 years old, but already dreams of being able to dunk a basketball.

That’s pretty ambitious for a future 5th grader who had never really played basketball before attending a Lakehead Public School summer program at Gron Morgan School, where she joined dozens of other kids learning the basics of the game from a pair of Lakehead Thunderwolves basketball players.

Besides the chance to play outside in the sun, Sara said she was intrigued by the sport and wanted to learn.

“It looks really interesting,” she said. “I know a lot of people who play basketball, so I thought, why not give it a try. I tried and it was fun.

The immediate goal is to hone a few basic skills – and maybe an advanced one or two.

Filza Asif, 12, is about to enter 7th grade and unlike her classmate Sara, she has already spent a lot of time on the court, attending several Thunderwolves basketball camps over the years.

It was pretty cool to have T-Wolves players Hana Whalen and Ally Burke come to their school and teach them some extra skills, she said.

“It’s very nice of them to take the time of their lives to come and teach people basketball when they could be doing other things,” Filza said, adding that she learned to dribble the ball between her legs. , not to mention shooting and teamwork.

“I feel like I should practice my long-range shooting and defense.”

Whalen, who has been at Lakehead for three years after graduating from Hammarsjkold High School, said the key is to keep it entertaining.

“It’s important to keep it super fun. They have a lot of energy so it keeps them engaged and having fun, especially on a hot day like today when some of them might not be as comfortable outside which makes them distracted,” Whalen said.

She also hopes to spark more interest in the sport.

Canadian basketball has been experiencing a resurgence lately. The Toronto Raptors won the NBA championship in 2019 and there are more Canadian men and women playing at the highest levels of the game than ever before.

Whalen said it’s not hard to see this success spilling over to the youth level.

“We already had our spring league, which ran from May to mid-June and we had record levels of kids joining the camps. We ended up having to use the new gym, just because we couldn’t accommodate all the kids we had in our gym,” Whalen said.

“It’s pretty cool because I’ve never seen so many kids in the camps, so it’s great that we can continue to develop that.”

Students who participate in the summer program, which is offered at several public schools, receive a comprehensive lesson plan that includes schoolwork, life skills like cooking, and arts and crafts, plus field trips. field and sports activities such as basketball.