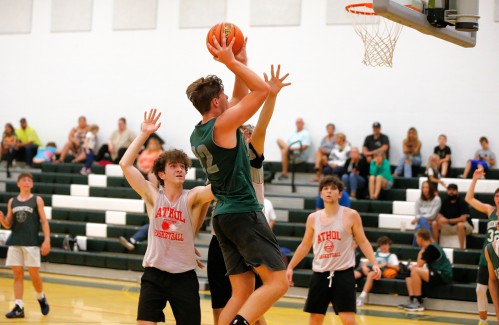 GREENFIELD – Summer is a great time to work on your game and local teams are doing just that in the DRIVE Basketball League at Greenfield High School.

On Tuesday, the Green Wave boys’ varsity team opened the night with a game against Athol. The Bears held on for a half, but Greenfield pulled away to claim an 80-55 win at Nichols Gymnasium.

For junior Jacob Blanchard, the success the Green Wave has had so far this summer should help them gain confidence ahead of next season.

“So far we’re 4-0, so I’m looking forward to our regular season,” Blanchard said. “We try to fit in well. We have great chemistry because we’ve been playing Suburban together since we were in fifth grade.

Greenfield’s chemistry on the court has been building for a long time, and the Green Wave is using this summer to gauge how they’ll look against teams they see during the college season.

“The core group is still three years apart,” Blanchard said. “We can play most of the teams we play in the season here, which is cool.”

While the Bears were unable to claim victory on Tuesday, Tontodonato – a rising senior – believes his team has improved over the summer.

“The summer league has been great so far,” Tontodonato said. “We see how we play with each other and develop that chemistry.”

Tontodonato said Athol is working on creating camaraderie and using the summer to grow together on the pitch.

“We are working on chemistry and ball movement,” Tontodonato said. “We want everyone to score. We want to be a team this year, not just a few guys on the pitch. Last year paved the way for us on how the tournament feels and how we want to get back to that level. We want to continue to take Athol basketball to the next level every year.

The second game of the night saw Mahar and Smith Academy tussle for a half before the size of the Senators took over in the second half to lead the Orange boys to a 54-42 triumph.

Like Blanchard, Mahar’s Owen Carl said he feels good about his team’s situation and hopes to continue building on that success next year.

“We’re just trying to get out there and prepare for the upcoming season,” Carl said. “We know we’re going to be a good team, that’s our plan, so we see our competition and see how we fare against them.”

Connor Sluder finished with 12 points in the win, with Will Barnes adding 10 points and Gavin Sullivan throwing nine points for Mahar.

The Senators were a young team last year, but after losing only a senior, they’ll be a team to watch come winter.

“We’ve had the same group of kids for years,” Carl said. “JV, college, we’ve been together forever. It’s fun and we’re finally on the big stage, playing well and winning games.

For Smith Academy, the summer has been a learning experience for young players. Tuesday’s game was packed with players who didn’t have much college experience in the past, so spending time on the pitch together was key to building chemistry.

“Everyone except me and one other guy are upcoming JV players,” senior Riley Intrator said. “It’s nice to give some of the kids who never played college a college experience. It gets them up to speed and what it’s like to play against college competition.

As an experienced player, Intrator has played a key role in the development of young players. He hopes the summer league will help the younger kids acclimate to what a college game looks like so it doesn’t come as a shock come December.

“I’m personally working on being more of a leader because we have a lot of young people in our squad next year,” Intrator said. “I train them and help them adapt to a faster, faster and better game. It’s my goal.”