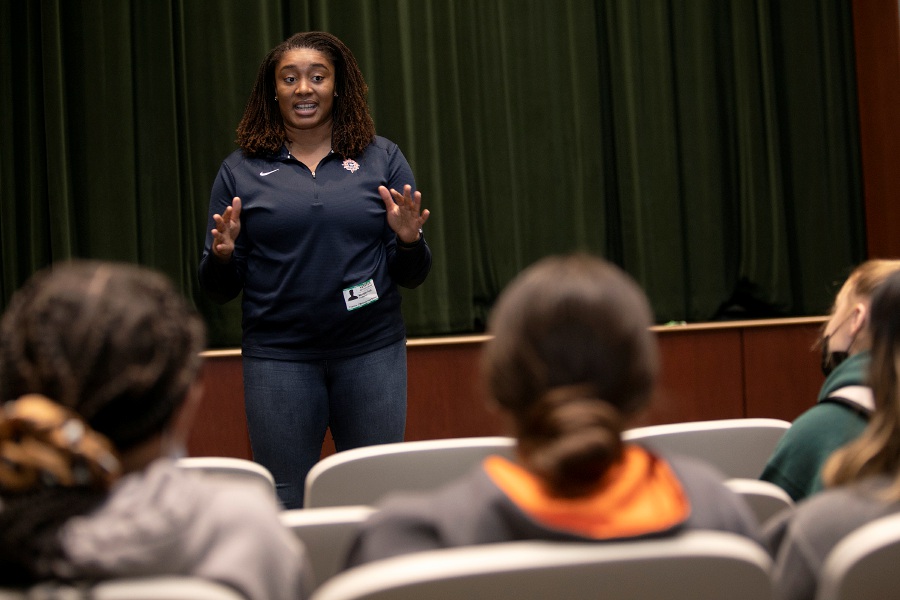 Tuck comes to Meriden to speak with women’s basketball teams

Tuck, 27, retired from the WNBA last March and now works as director of franchise development for the Connecticut Sun. She spends part of her time speaking in schools.

The 6-foot-2 forward told Meriden athletes her story on Friday, her ups and downs and everything in between.

The Chicago native won four national championships during her four years at UConn, was drafted by the Sun as the third overall pick in the 2016 WNBA Draft, and saw knee issues — Tuck had seven surgeries — cause premature retirement.

Tuck played most of his WNBA career with the Sun and his final season with the Seattle Storm.

“Basketball has given me so much and helped me become who I am,” Tuck told the Maloney girls on Friday. “I was able to play overseas and play in Europe or South America and I got paid for it.

“I had my last knee surgery last November and I feel like I’m over 27, but I’ve been able to travel and see things I never would have seen without basketball- ball,” she added.

Tuck told the Meriden student-athletes to take advantage of their teammates every year because every year the team is different and people come and go.

“What you have in high school is super special,” Tuck said. “It’s hard to think about it now, but don’t rush to get old and grow.”

Tuck also told the girls to play on themselves. She cited a family member who, for various reasons, said she shouldn’t go to UConn, but Tuck made her own decision.

“I went anyway,” Tuck said. “I moved away from home and it was probably the best decision I made. I took a chance.”

Tuck said she also tried her luck playing in China.

“No one spoke English except for a translator and I wasn’t sure I could do that,” Tuck said. “Those were difficult and difficult times. There were times when I called my mother crying, but it made me grow. I would never have had this opportunity without basketball.

“Stay true to yourself and your goals,” she added. “You don’t know where you’ll end up.”

Tuck also told the athletes to mind business at school.

“If I didn’t do well in school, I wouldn’t have this job,” Tuck said. “Doing well in school is your baseline and everything else is extra. You need that education.”

Tuck answered questions about conditioning, goal setting, time management, playing for Hall of Fame coach Geno Auriemma, watching a game movie, having good body language on and off the land, among other topics.

Tuck talked about being a role model for others.

“When I came to UConn, I had never seen such support for women’s basketball anywhere else,” Tuck said. “People look up to us. You just see yourself as yourself, but you have to be careful how you present yourself. Because someone is always looking at you from a different angle.

Maloney girls’ basketball coach John Vieira said it was a great experience having Tuck as a guest.

“It’s good for them to hear from someone who’s been through it all at the top ranks – you can’t go higher than UConn basketball,” Vieira said. “The fact that she comes here and imparts wisdom means a lot.

“Having someone like that in our backyard means everything,” Vieira added. “That’s what it will take to grow the game. We’re at a point right now where the kids are starting to enjoy the game. Bringing Morgan in and sharing his experience means a lot. It’s good that they hear a different voice from that of Coach V.”

Maloney’s junior forward Jaylice Rosario said Tuck had an impact on her.

“It was great to hear her story of how she started from the bottom up at UConn,” Rosario said. “I learned to keep working and trying and I could go anywhere.”

Tuck said she loved talking to high school students and telling her story.

“It brings me back. When I was in high school, I was looking forward to going to college, but now I would go back to high school in a second,” Tuck said. “When you’re young, it’s hard to see the value when someone older comes back to talk to you, but even if they get a little piece of today, it can open up a thought that they don’t. hadn’t before. It’s always a good opportunity to talk with young children.