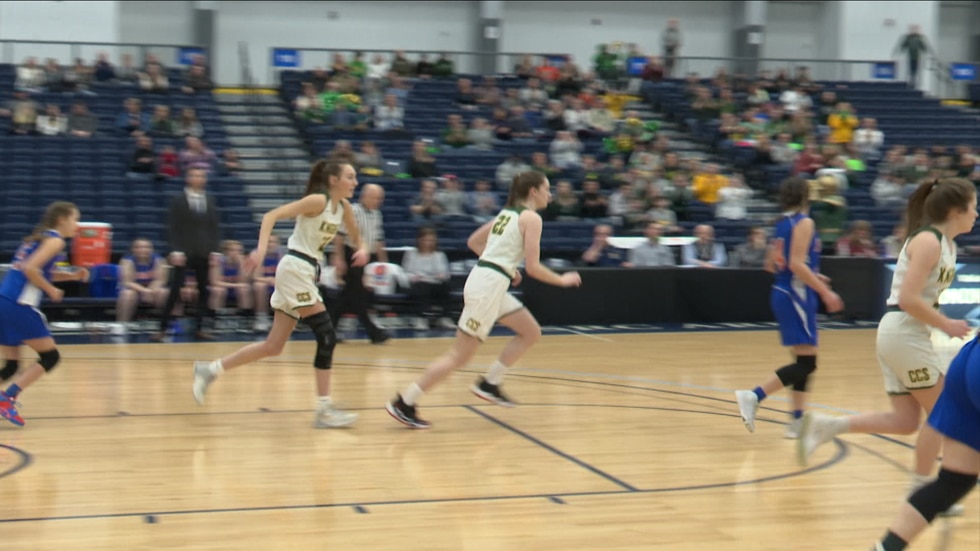 Copenhagen looked to control Poland’s Logan Cookinham as she scored the first 3 points of the match.

“I think the difference in the game was basically our defensive pressure, which allowed us to get out there and be able to run down the field, get easy lay-ups on a few steals and relax a bit after that. Continuing that tenacious defense that we love to play and making our offense work from there. Obviously Charli Carroll was a huge factor in this win,” Copenhagen coach Natalie Scott said.

“Honestly, I’ve been working on it for a week, because unfortunately my twin tower got injured in the gym. A little accident happened that put a little more pressure on me because I didn’t have the person I felt most comfortable with. So being able to take control really gave me more confidence as the game went on,” said Charli Carroll who scored 33 points in the win.

“Really exciting. I’m so excited to be able to do it with this team because a lot of my friends are in it and we’re just really close and it’s a feeling that I can’t describe. I’m so happy,” said said Samantha Stokely.

Stokely had 9 points, 9 rebounds and 5 steals in the win.

The Class B crown was up for grabs as General Brown took on Bishop Grimes. Lions 21-2 on the season so far.

On the ice were the New York State Division 1 quarterfinals as the Canton Golden Bears hosted Suffern, ranked No. 1 in the state.

Ryan Schelling of the Spartans crushes the defenseman and puts the puck in the net. 1-0 Suffern.

Canton has a chance to tie when Drew Blevins shoots on the net. He would later score Canton’s first goal.

Jack Flatley at the gate takes in the rebound. 2-0 Spartans.

Colin Nolan snipes a shot from the left point that finds the mark. 4-0 Suffern.

Aydan Greenburg with the dish to Harry Balk for the score. Blevins and Rhett Palmer would score the goals for Canton, but Suffern would score a 10-2 win and advance to New York State’s Final Four next weekend.

St. Lawrence University was looking to knock out Brown in Game 2 of their best of 3 ECAC quarterfinals at Appleton Arena.

Late in the 1st, St. Lawrence takes the lead when Kaden Pickering lights the lamp, this game tied at 1 after 1 period.

This game goes to overtime where Justin Jallen’s redirect ends it.

In the 1st period, St. Lawrence led 1-0 when Isabel Silvia scored on the doorstep: 2-0.

In the 2nd period, now 4-1 St. Lawrence, Morgan Arakelian digs the back of the net: 5-1 Lady Saints.

On the men’s side, Clarkson hosted Nazareth.

In the 1st half it was 2-0 Clarkson when KJ Sarni rips the thread. The Golden Knights lead 3-0.

Then it’s Bryan Penney with the laser that continues: 4-0 Clarkson.

Matt Reilly continues the assault with the count, 5-0 Clarkson.

In the 2nd half, the score was 7-2 Clarkson while Andrew Kearney climbs on the upper plateau: 8-2.