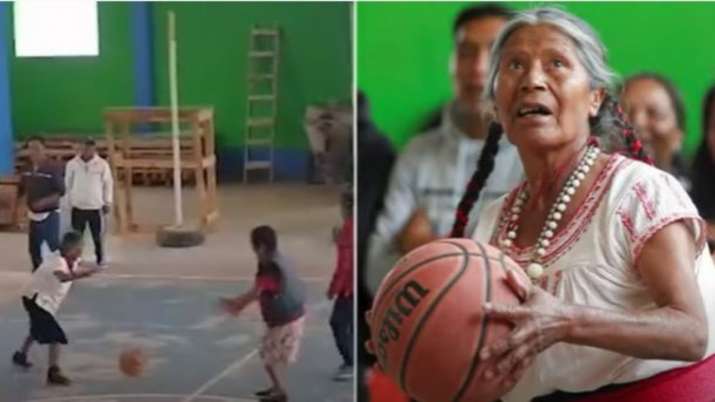 People in their 70s and 80s often enjoy spending time with their grandchildren. Some like to take care of their health by doing gentle exercises so as not to injure themselves. While others of the same age group are keenly interested in sports. There are many examples of men and women in their 70s and 80s with excellent athletic skills. And again, a similar video of an elderly woman playing basketball amazed netizens.

A video of 71-year-old Andrea Garcia Lopez known as “Granny Jordan” is going viral on the internet. She is said to rule the basketball court with her super amazing skills. The woman is from a small town in Mexico called San Esteban Atatlahuca, Oaxaca.

A video showing off his excellent basketball skills on the court has surfaced on several social media platforms and left people speechless. In the video, she is seen dribbling, passing balls and hitting a basket and earning points by cheating the opponent so gracefully.

According to Reuters, Ms Lopez is a local craftswoman. In an interview, she said that she started having knee problems, but still hopes to play basketball for many years.

The 71-year-old is now a star. Her video shared by her grandson has received nearly a million views. Social media users are leaving their passionate comments on her video.

One user wrote: “Very Nice Likei wish you a wonderful day!”. Another wrote, “A 71-year-old Mexican grandma is ready to give some of the NBA stars a hard time.” “He really is a superstar,” wrote the third user.

Before that, a video of a 64-year-old man from Kerala juggling football like a pro went viral on the internet. It was shared by an Instagram account named “prsoccerart” where James was seen flaunting his juggling skills. His caption read: “I had the privilege of meeting this 64 year old man who still plays football. He drives a truck for a living and carries his football kit with him in his truck. He was part of the wayanad football team and is the only one who still plays the game. One thing i really learned from him is this: do you like to do something? Go ahead and do it. As the song says: ” ONE DAY WE WILL LEAVE THIS WORLD BEHIND, SO LIVE A LIFE YOU WILL NOT OPEN. The full video of this can be found on my youtube channel.”

Also read: Zomato to help a 7-year-old boy who became a delivery manager after his father’s accident. Internet users react